You are here: Home1 / RE Education2 / Special Topics3 / The Earnest Money Deposit – From Contract to Close Series

Note from Michael: This post and video are the first in a new series called the A.CRE Contract to Close Series. In this series, we’re going to explore all the various things that typically happen, or that should be happening, from the time a PSA (“purchase and sale agreement”) gets signed to the time of closing when ownership of a property is formally and legally passed from one entity to the next. In this post and video, we’re going to go over the earnest money deposit.

What is an Earnest Money Deposit

The earnest money deposit, also known as the good faith deposit or good faith money, is a sum of money that gets deposited by the buyer of a property into an escrow account usually a few days after signing the PSA, or purchase and sale agreement. The money, usually a small percentage of the purchase price, is used as a sign of good faith that the buyer is serious about purchasing the property.

Is the money non-refundable?

Who holds and manages the earnest money deposit

The earnest money deposit should be held by a neutral third party that is usually an escrow agent. Typically, the title company working on the transaction will double as the escrow agent. The agent will only release the funds once the obligations have been met according to the PSA and upon the written instructions form the seller or seller’s attorney. 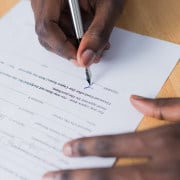 The Earnest Money Deposit – From Contract to Close Series